The world of Dysotopia consists of an entire island continent.  From it’s sandy shorelines and vast plains to it’s deep forests and mountains it is full of life and adventure for those who seek it. 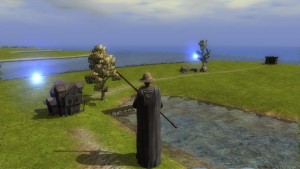 A unique feature of Dysotopia is that it is possible for characters to gain access to a special area known only as the “World Map”.  This area contains numerous landmarks and accurately represents the real world of Dysotopia.

In addition to being able to see where things are in the continent, characters can also travel to locations which they have previously visited offering an excellent form of long distance travel for adventurers.

To access this powerful form of travel, characters simply have to use a waypoint (that matches their alignment) and they can be transported to the world map.

Each character can also select a waypoint to respawn at in the event that they fall in battle and cannot be resurrected.

Once on the map, characters can walk about and exit the map at any location they have previously unlocked (visited).  These locations are interactive icons that when clicked will give players the option to travel to a specific location.

One side effect of teleportation is that characters will suffer nausea resulting in a temporary loss of attributes.  This effect only lasts a short while and can be removed by divine magic if it is available.  This “sickness” discourages characters from blitz attacking through waypoints or immediately after respawning.