The best part of any great adventure is treasure!  Dysotopia 2 implements a complex random looting system and boasts over a million possible item variations.  These variations include item styles, item colors and magical item properties (enchantments).

The primary source of every item in game starts with the large variety of base items.  These are individually crafted variations in style and color of all items in game.  Varieties of boots, gloves, hats, armors, etc in different shapes and colors.

In addition to finding base items, there is a chance that items you find (in chests, on corpses, and even in shops) have simple enchantments (up to two random enchantments per item, a prefix and a suffix).

Combined with the crafting system, the number of item possibilities is nearly endless.

Whenever a creature is spawned there is a chance it is given a random amount of gold relative to the number of hit dice the creature possesses.  In addition to gold pieces, each creature has a chance to receive random pieces of loot from configurable loot tables.  These treasure then have an additional chance of being enchanted with either a prefix, suffix or both a prefix and a suffix enchantment which is randomly selected from enchantment tables.  So a creature may receive a “Copper Ring” which is then prefixed with “Wizard’s” (+1 wizard spell slot) and suffixed with “of Lore” (+5 lore skill) thus creating a “Wizard’s Copper Ring of Lore” for the lucky finder.  These items are unidentified and add to the excitement of looting corpses. 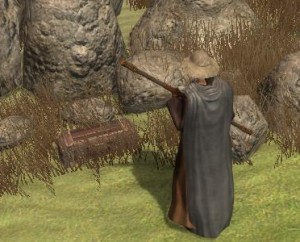 Nothing is more exciting than coming across a chest full of loot.  In Dysotopia, random loot is placed into containers using the same methodology described in the previous section.  Containers, however, have additional features to provide additional variance and challenge to the game experience.  Every chest may have a certain chance of being locked…and with a random DC.  They may also be trapped again with a random DC and trap type.  This makes having a rogue in your party a great benefit on loot runs.

Chests may also be bashed.  Chests have high damage absorption and hit points and the act of bashing a chest may be exhausting but is usually worth the effort.  Only the strongest of characters can easy bypass locking mechanisms on chests and doors.  When a chest is bashed the lock is simply broken and the chest becomes accessible.

Chests, like spawn points, will regenerate their loot and re-lock/trap themselves with a random chance at certain intervals.  This delay prevents players from “camping” chests and gives new adventurers a chance of finding a fresh chest of loot.  Chests will never “respawn” when there are players near them so feel free to take your loot and move along as that treasure won’t be back for a while. 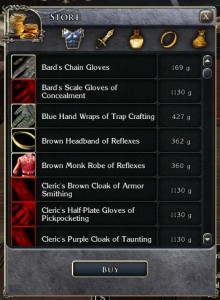 There are two types of stores in Dysotopia, standard merchants and pawn shops.  Both of these shops can take advantage of random inventory generation similar to the way loot is created on creatures and in chests.  Stores can have both standard inventory items as well as randomly generated items which refresh after a certain interval.  This makes visiting towns and checking out the available equipment inventory a part of your characters good habits.  With millions of item combinations you never know when that show is going to have the perfect pair of gauntlets for your paladin.