The world of Dysotopia is already filled with danger and hardship for adventurers traveling the continent but for those seeking an extra challenge there exist dungeons.

Dungeons often provide unique challenges for adventurers to overcome.  They can be confusing to navigate and are often filled with traps and road blocks forcing adventurers to take alternate routes to reach the deepest depths.   They are often poorly lit and the most powerful of creatures take up residence in them.

While the layout of dungeons are static, there are many things within a dungeon that provide unique challenges every time adventurers play through them.  Dungeons contain numerous random components that make the experience for players challenging on every play through.  These components include traps (random type, detect DC, disarm DC), locked doors (randomly locked, random unlock DC, various hardnesses effect bash-ability), treasure chests (random traps, locks and bash-ability), and creatures (random chances of different types of creatures and bosses).  All of these things combined with the type of party you bring into a dungeon will offer players a variety of replay-ability in most dungeons.

Navigating dungeons is a hazard in itself.  Many dungeons are filled with traps and locked doors forcing adventurers to seek alternative routes in an attempt to reach the deepest depths.  There are often multiple ways to reach the same destination so finding the safest route can be challenging.

The inadequate lighting in most dungeons can be a hinderance to ill prepared adventurers.  One should always be prepared to provide their own light or have the ability to see well in the dark.  Most dungeons have some light sources but the deeper you venture, the more likely you are to find yourself in complete darkness.

Secrets abound in most dungeons.  These can range from hidden treasures to secret passageways.  You may find a secret shortcut or a hidden treasure chamber if you look long and hard enough. 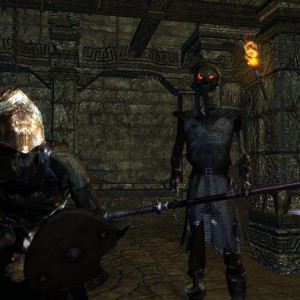 Dungeons are often home to powerful creatures.  These creatures often rule over dungeon domains and are significantly more challenging than the everyday creatures encountered by adventurers.  It will often take several adventurers working together to bring down boss creatures but the reward is usually worth the risk.

Some of the best treasure available on the continent of Dysotopia can be found in dungeons.  Many relics of the past have been long forgotten in these places and because they are never explored by the general population they have kept their secrets hidden for ages.

Dungeon treasure is not to be taken lightly and is often guarded by powerful traps, locks, and creatures which will do their best to see that you do not leave with their relics.

All dungeons are level restricted.  This prevents low level adventurers from entering into dungeons which are too challenging for them as well as keeps high level adventurers out of dungeons which will not offer them any challenge.  This also helps keep the game challenging for players as they will have to be creative and come up with strategies to explore dungeons rather than hiring a high level character to plow through the content for them. 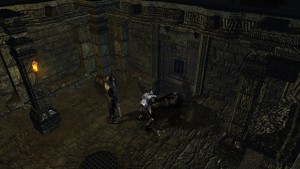 Dying in a dungeon can be harsh.  Most dungeons have a lobby just inside the entrance which allows adventurers to form parties and prepare before venturing into the hazards within.  These lobbies usually contain waypoints as well, allowing adventurers quick access to dungeons they have previously visited as well as giving them a place to respawn if they perish in the dungeon.

It is always a good idea to bring a party member along who can resurrect fallen party members as this can greatly increase the chances of success in dungeons.