Clutter can often be an issue with persistent worlds.  We have corpses lying around, lazy player that litter their garbage in shops, etc. 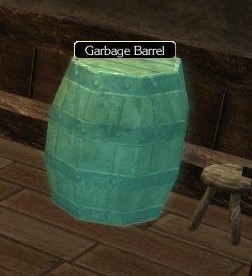 There are garbage barrels found throughout the civilized areas of the world that when closed will destroy any items placed inside of them.  Use these at your own risk, anything you throw away cannot be recovered by anyone (not even admins).  We do encourage players to keep the world free of clutter but we know this can be a lot to ask.

Each area in Dysotopia has a garbage collection routine that looks for items laying around on the ground and automatically cleans them up.  This includes corpses and remains.  Basically if an item is on the ground for a set amount of time and there are no characters near the item it is marked for deletion.  When the next sweep comes (many minutes later) if the item is still abandoned it is destroyed.  This helps reduce the memory load on the server (imagine if corpses never went away!) and keeps the world tidy.

Items destroyed by garbage collection are permanently gone and cannot be recovered.  This includes corpses of rare creatures or powerful bosses.  If there’s no one near the corpse for a while the engine assumes it is abandoned and cleans it up.